Flaming Lips @ the Oakland Fox
by Rebecca Gayle
On Saturday, Oct. 2, the Flaming Lips brought their quirky, out-there antics to the Oakland Fox Theater, transforming the venue into something that can only have sprouted from the wacky mind of lead singer Wayne Coyne, with help from the rest of the gang.
To start the show, second opener, HEALTH, an experimental noise-rock band from Los Angeles, shook down the house with its grippingly dark, bass- and drum-heavy noise rock. The darkly enthralling noise rock the band produced throughout the set could even be heard from the corners of the Fox’s bathrooms – an area of the venue that typically does not offer much listening – and brought Flaming Lips fans to the precipice of forming a mosh pit. (If any band could bring the relatively peaceful Flaming Lips fans to mosh, it would be HEALTH.) The melancholy of HEALTH’s unabashed noise-rocking left the audience no choice but to stare and stand riveted in awe of the sheer volume erupting from the instruments of the four relatively small-statured male band members maneuvering them. The music itself was not the only element of HEALTH that transfixed the audience, however; the energy with which each of the band members attacked their instruments, persuading them to make the maximum amount of sound possible, was impossible to ignore.
Bassist John Famiglietti’s twisting, writhing, and magnificent head/hair-banging alone was enough to warrant penetrating stares of wonder from the audience, but the impressive energy that each of the band members channeled into his instrument and performance really kept that attention riveted to the band and its sound as a whole. At one point in the show, all four band members seemed to be overtaken by a seizure-induced, frenzied need to dance, bringing their already high energy level to an even higher peak, at which it appeared all of them might collapse from exhaustion. Throughout their performance, the members of HEALTH more than established their talent, not only at making ear-blisteringly hard-driving tunes, but also at throwing down a solid performance that oozed an unyielding need to embody their music. All of the elements that HEALTH brought to its show – the band members’ incredible penchant for performing, the earth-shaking bass, the stack of pulsating amps, and the band’s innovative, hard-driving sound – made the show an absolute pleasure to experience and make the audience wonder, “Who are these guys?” and “When can we see them again?” – questions that every up-and-coming band wants to hear.
After HEALTH left a lasting impression on both the audience’s eardrums and minds, it was up to the Flaming Lips to top a highly energetic performance. And top the performance they did! The Flaming Lips managed to pull out all stops to provide what lead singer Wayne Coyne laid out at the beginning of the show – a total freakout. Small hand-held lasers were distributed to the audience before the band took stage, marking the beginning of a freakout that would prove to be no less than epic. Before the band began to play, Coyne took stage to warn the audience of two things: being crushed in the pit and the risk of seizures due to the intensity of the strobe lights they use throughout their show (these pre-emptive warnings practically guarantee a fantastic show.)
After some prep time to ready all the stunts they had in store for the audience, the Flaming Lips finally took stage, but not in the normal fashion. Instead, a video showing a naked woman dancing and gyrating played across the entirety of the Fox Theater’s stage. The woman then laid down, legs spread wide open, with the area around her vagina pulsating rainbow colors, and proceeded to “give birth” to each of the members of the Flaming Lips. And so began the show of a lifetime. 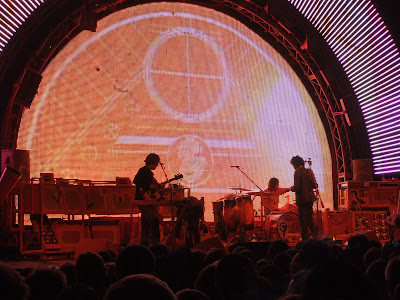 Lead singer and freakout leader extraordinaire, Coyne began this set in his typical fashion – climbing into a large, inflatable hamster ball and rolling around on top of the audience members in the pit. Once he had climbed all over the floor audience, Coyne exited the bubble and the band began to play its bass-driven “The Fear,” and the show really started to come to life. Even sans the human bubble, the Flaming Lips provided so many attention-grabbing stimuli throughout the band’s set that, frankly, one could not help but be overwhelmed, both visually and aurally. 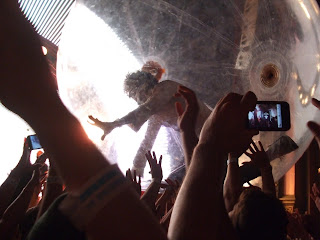 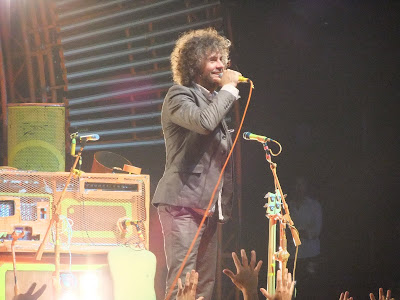 The band whipped out so many antics that the show as a whole still seems incomprehensible. For example, Coyne shout-sang into a megaphone while standing on the shoulders of a bear (really, a man dressed in a bear suit), then, later in the act, proceeded to hold two giant hands that shot out lasers from their palms, pointing them at the two giant disco balls hanging from the ceiling to evoke an image of the night sky and the universe. The Flaming Lips also overwhelmed the audience with the sheer amount of confetti and balloons that they launched onto the crowd during one of their opening songs – so much so, that it felt as though the band was throwing a massive birthday party. The show as a whole – complete with audience members happily dancing and gyrating on the sides of the stage, clad in bright orange uniforms inspired by the kids’ show, “Yo Gabba Gabba!” – was no short of an assault on the visual and aural senses, but a welcome assault at that, and one that left the audience wondering where to look and what to expect next. 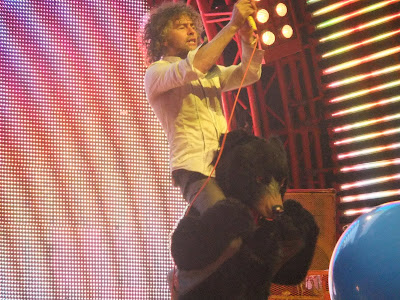 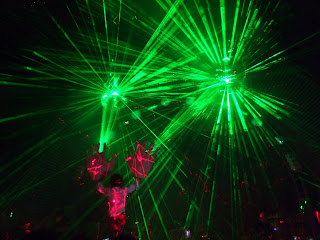 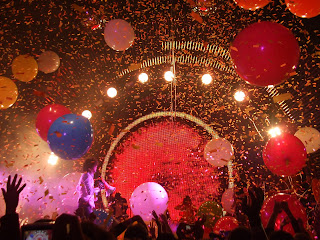 Even without considering the Flaming Lips’ experienced musicianship and incredible sound, this show was the show of a lifetime, complete with the most antics the majority of concertgoers have ever seen in a single show. The great music, paired with the mind-blowing freakout of the show itself, made this night at the Fox unforgettable and a memory that those in attendance will take to their graves. The Flaming Lips – even after over 20 years of performing – certainly outdid themselves, recreating an amazing LSD-like music experience that left the entire audience in awe of their abilities as musicians and entertainers. Even those unfamiliar with the Flaming Lips and their music should take a chance to experience the band’s amazing, mind-expanding, over-the-top showmanship, as no one can be disappointed by the elements of music and performance that the Flaming Lips continue to capitalize upon with time. 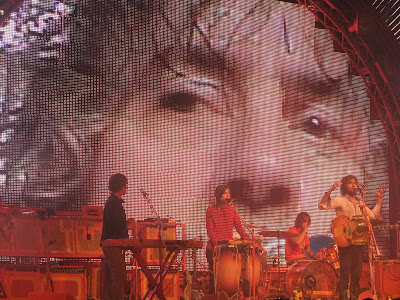 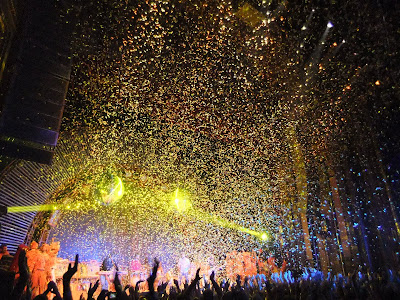