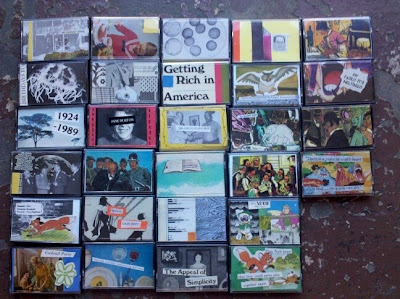 Ohio’s Jordan Lee has proven to be a kind spirited man of many talents. Not only does he run a music blog and his own label called Kassette Klub, he also records deeply emotional, experimental folk-pop under the name Mutual Benefit. He released his first cassette, called Figure In Black, back in December of last year. Each side of the tape features a continuous collage of gentle pop songs, experimental noise, and psychedelic samples.
A couple of songs that were included on these early recordings made their way onto his Drifting EP, which was released digitally in April. In October, he released another short album called Spider Heaven and issued both of these releases together on one cassette. Each cassette sleeve features a unique handmade collage crafted from thrift store children’s books, obscure comics, and vintage National Geographic magazines, making each individual cassette a true work of art.
On this release, Jordan builds from the experimental pop sound he established on Figure In Black and refines it to a concise expression of pure emotion. The opening song, called “Here,” is an elegant piece of folk-pop with subtle swirls of psychedelic synths backing Jordan’s acoustic guitar plucking and sweet, sentimental vocals.
“No Mundo Da Luda” is essentially a brief series of infectious pop hooks, which follows the theme of alternating between acoustic and electric sounds. The title track of Drifting, originally featured on Figure In Black, is a psychedelic, Flaming Lips-esque pop song with bubbling beep-boops and frantic little piano strokes. For me, listening to this song literally brings back forgotten childhood memories.
Jordan’s touching, whispery vocals on the outstanding “Nite Bike” is sure to send a shiver of raw emotion down your spine. Hidden on Side A is an alternate, acoustic demo of the song, which complements the electronic version quite nicely.
On the other side of the tape is the equally impressive Spider Heaven, which has a running time of about 17 minutes. With the help of “percussion master” Andrew Morehart, Jordan further implements his instrumental dexterity and superior songwriting over these six tracks. The songs that stand out the most are “Desert Island Feeling” with its gorgeous one-man harmonies, and “Moonville Tunnel,” which could easily be one of the finest pieces of folk music I have heard all year.
The song “Golden Path (unavailable)” reprises to more experimental fare, in which Jordan sings over distorted guitar delays and irregular percussion to surprising effect. The album ends on a bit of a somber note with “Golden Path (all right)” which opens with a hauntingly vulnerable a capella verse, concluding with some beautiful acoustic guitar work.
The first round of Mutual Benefit tapes have sold out, but Jordan is releasing a second edition of handmade cassettes on his label Kassette Club. Don’t miss your chance to own one of these very special, handmade works of art from one of the most generous and fruitful new artists of the year. If tapes aren’t your thing, both Spider Heaven and Drifting EP are both available on Bandcamp, as well as Figure In Black.
Drifting
Here
Posted by Tim Draut @ 5:40 AM