by Rebecca Gayle
This year’s Halloween weekend festivities kicked off with spirit and pizzazz, with Janelle Monáe and Of Montreal playing an unforgettable show at one of San Francisco’s most classic venues, the Warfield.
With Janelle Monáe opening, sauntering down the packed space of the Warfield slightly late for the evening’s opener – a tardiness that is often forgivable or even preferred, depending on the event and the concertgoer – only served as a disservice to the listener, as Monáe’s soulful pipes and theatrical performance provided an opening show that could not be missed. Even before hearing Monáe’s beautiful voice, the claustrophobic, audience-filled bowels of the Warfield spoke of her absolute talent and command over both her performance and the audience’s attention.

Even without any preconceptions – or knowledge, really – about Monáe and her music, her performance was nothing short of impressive and enthralling. From the time her lips parted and released her beautiful, rich voice with incredible depth, my jaws dropped, and I was left wondering how such a young, petite figure could produce such a powerful voice dripping of soul, funk, and R&B.
In addition to her incredible voice and sheer talent as a solo artist, Monáe’s performance alone was entirely riveting and a refreshing deviation from most solo artists’ duller approach to live shows. Monáe incorporated some rare oddities rarely seen in a concert, literally painting on an easel and canvas during one of her songs. She also paid her respects to Halloween with some dark, beak-clad figures in capes running around behind her that she eventually ended up fake shooting while belting out the lyrics of another number. To end her set, Monáe belted out, “One more time!” to her back-up keyboardist/synthesizer multiple times, as if to remind the audience of her immense range as a vocalist and her abilities as a performer before she left the stage. 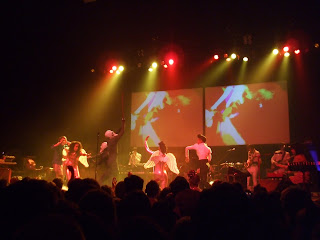 Throughout her whole performance, Monáe established her unquestionable talent and promise as a musician – so much so that some concertgoers even left after her performance, not wanting to stick around for the headliner, Of Montreal. Monáe’s voice and theatricality – on top of her creativity and defiance of fitting into a cookie-cutter sound or role – are guaranteed to take her far, and I will not be surprised if she becomes the modern queen of soul and funk.

Janelle Monáe’s stellar, theatrical performance set the stage for what was to become one of the zaniest shows ever – something that is barely describable in words and nothing short of expected from a freak-funk outfit like the evening’s headliners, Of Montreal. The zaniness of the show – which was markedly different from the Flaming Lips freak-out I experienced just a few weeks ago – began when robed figures with fish heads wielding fake guns appeared before lead singer Kevin Barnes and the rest of the band took stage, opening with “Black Lion Massacre” and then launching into the band’s more popular single, “Coquet Coquette” from its newly released album, False Priest, before playing a mix of songs spanning the band’s last few albums.
Like Of Montreal’s new album, the band’s show was a conglomeration of insanity in its psychedelic, trippy, freak-funk twist on indie pop. The robed fish heads with guns were just the beginning – the performance also featured giant skull-head people that danced around on the stage, people dancing and running around in checkered body suits, half-naked men with cloth bags on their heads, and a woman dressed up as a pig. At any given point in the show, these characters would be featured in an equally strange manner. For instance, at one point in the show, lead singer Kevin Barnes – as Georgie Fruit, his cross-dressed performance alter ego, for the entire evening – put his head under the butt flap of one of the two shirtless men, who also had cloth bags tied / taped around their heads and were sticking their tongues out in unison to the beat of the song.
Of Montreal also featured the pig lady in a very prominent part of their performance, in which she and the lead singer had “stage sex” in front of the audience (from the front and from the back, in case you were wondering), followed by another stage performer pretending to eat the meat from her stomach while she was laying on a bed on stage. These are just a sampling of some of the crazy antics that Of Montreal had going on at any given point in their performance; really, there were so many random things happening that it is difficult to recount them all. (The bottom line here is, in order to truly experience this type of overwhelmingly weird and trippy experience, you just need to see Of Montreal live.) 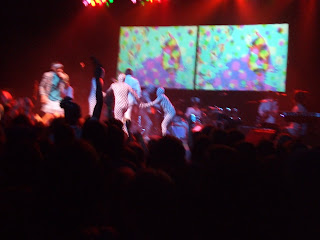 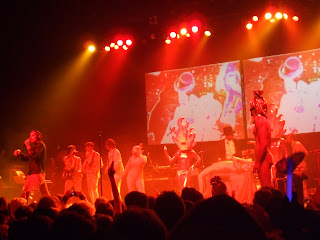 Although the show was provocative – both in its musical content and in the taboo subjects the performance seemed to address – I personally found the performance as a whole to be more distracting than enlightening. As a fan of Of Montreal’s unique sound, I felt that the sheer volume of background events going on detracted from the great music the band creates. Throughout the whole show, the band – minus the lead singer, Barnes, who was wildly jumping and running around on stage for the whole two hours of the performance – was also pushed toward the side and back of the stage, minimizing the musicians’ major contributions to the show. And, except for some infrequent jam sessions featuring the guitarist and bassist, the band seemed to almost hide behind the fish heads and skull people, making the audience forget what the real focus of the show should be – Of Montreal’s music.

At the end of the night, which featured an unexpected cover of Michael Jackson’s “Thriller” to signal the official start of the Halloween weekend, I felt that Of Montreal’s music suffered from the band’s over-stimulating performance. Although the band played a great mix of their hits – including some favorites from False Priest and 2007’s Hissing Fauna, Are You the Destroyer? – Of Montreal’s stage performance did not particularly enhance the musical experience for me, although it obviously adds an interesting draw to their live shows, which most shows don’t even come close to matching.
After witnessing the insanity of Of Montreal’s live show and hearing some of my favorite songs, I still could not help but exit the Warfield feeling disappointed that the band’s performance overshadowed its music instead of highlighting and strengthening it, but happy to have witnessed the band’s infamous zaniness first-hand. 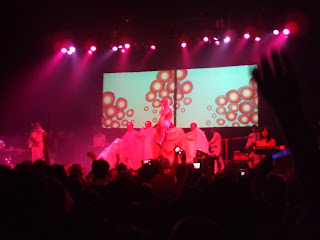 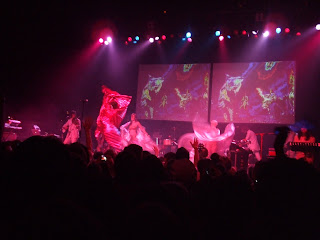